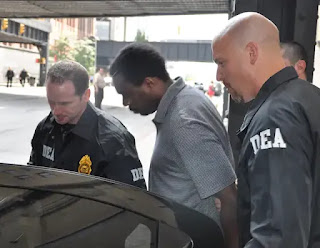 The waning days of Donald Trump’s presidency saw a carnival of celebrities and those with personal connections to him jostling for clemency. Trump obliged many of them, granting pardons to rappers Kodak Black and Lil Wayne and longtime allies Stephen K. Bannon and Roger Stone.

And then there was James Rosemond, known as “Jimmy Henchman,” a once-major player in the hip-hop industry who represented artists such as Salt-N-Pepa, the Game, Akon and Brandy before he was condemned to nine life terms for drug trafficking and murder for hire.

For years, Rosemond’s attorneys and a cadre of celebrity advocates — including retired National Football League great Jim Brown and the actor Michael K. Williams, who died last month — had argued that Rosemond was unjustly convicted, campaigning for President Barack Obama and then Trump to grant him clemency.

Late last year, it appeared to Rosemond’s advocates that they had succeeded. On Dec. 18, Trump called Brown and his wife, Monique, according to legal affidavits signed by the Browns. “Let’s get this guy home for Christmas,” Trump told the staff in his office during that call, the Browns said.

By the end of the conversation, the Browns said, they had no doubt that Trump meant he was commuting Rosemond’s sentence. Rosemond’s representatives say that they were told his family should go pick him up the following week and that loved ones traveled to West Virginia to be there when he walked out of prison after a decade inside.

The Browns’ affidavits are now central to a novel legal argument being advanced by Rosemond’s attorneys that speaks to the mad dash at the end of the Trump administration, when celebrity and influence injected even more uncertainty than usual into the unsettled, high-stakes law of presidential clemency.

In a petition filed Thursday afternoon in federal court in West Virginia, Rosemond’s attorneys claim that Trump’s conversation with Jim and Monique Brown constituted a public communication that he was commuting Rosemond’s sentence, which they said is all that is required to make the decision binding and irreversible.

“Rosemond is serving a sentence that no longer exists,” his attorneys write. Though the 20-page petition cites obscure examples of informal presidential clemency decrees dating to President Abraham Lincoln’s handling of Civil War deserters, Rosemond’s attorneys acknowledge in the document that “this exact situation is unprecedented — it does not appear to have happened in the history of the United States.”

In a statement to The Washington Post, Rosemond attorney Michael Rayfield said that despite the lack of precedent, “it’s clear to me that Jimmy doesn’t belong in prison for another day.”

Jim and Monique Brown declined to be interviewed, because, their attorney said, they anticipated that they may be called as witnesses if the habeas corpus petition — a tool used by prisoners to argue they are wrongfully imprisoned — moves forward. A spokesperson for Trump did not respond to an email seeking comment.

Mark Osler, a professor of law at the University of St. Thomas in Minnesota who has argued for changes to the presidential clemency process, said that the argument “presents a fascinating question that hasn’t been addressed in modern times.”

“They’ve got a good point, which is that the Constitution does not set out a method to the granting of clemency,” Osler said. While in other cases, presidents, including Trump, signed pardon warrants, “there’s no statute or constitutional provision that requires that.”

Margaret Love, who served as U.S. pardon attorney from 1990 through 1997, said that the petition, as described to her by a reporter, touches on “really interesting” questions about the legitimacy of a pardon or commutation only uttered by a president. “I believe there’s no reason in principle that a president should have to write something down,” Love said.

But she said she believed Trump’s language, as she gleaned from the Browns’ affidavits, did not amount to a clear declaration that he was commuting Rosemond’s sentence. “While the president indicated an intention to do the grant, it does not sound to me like he actually did the grant,” Love said.

In his quest for presidential clemency, Rosemond, 56, appeared to fit Trump’s unusual requirements for freedom, which often appeared to hinge on a subject’s overlap with celebrity and personal influence.

In 2013, Loretta E. Lynch, then the U.S. attorney for the Eastern District of New York, called Rosemond a “thug in a suit” following his life sentence for drug trafficking. Rosemond was later convicted of ordering the murder of an associate of rapper 50 Cent, following a previous hung jury and overturned conviction in that case.

His advocates have maintained that Rosemond’s gangster reputation, including that he was alleged to have shipped cocaine slathered in mustard to thwart drug dogs, was a concoction. They say that he was the victim of headline-seeking prosecutors who utilized lying informants to wrongfully portray him as a kingpin despite a dearth of evidence.

“Jimmy Rosemond got significantly more time than ‘El Chapo,'” said Kimberly Kendall Corral, a lawyer hired by the Browns to advocate for Rosemond, referring to the Mexican drug lord who is serving life in prison plus 30 years. “Meanwhile, the feds wiretapped his phone for two years and never once did he talk about the drug trade.” (Representatives for the Eastern District of New York did not respond to a request for comment, and representatives for the Southern District of New York, where he was also prosecuted, declined.)

But the effort got real traction only after rapper Kanye West’s much-publicized visit with Trump in October 2018. West was joined by Jim Brown and Brown’s attorney, Corral. She said that while the Oval Office scrum was focused on the rapper, she spoke to Trump and showed him materials about the case and ended up talking to a White House counsel that day.

Corral said that over the following two years, she and other Rosemond attorneys negotiated with a de facto White House clemency team led by Jared Kushner, Trump’s adviser and son-in-law. At their instruction, she said, she reduced a 27-page request for a presidential pardon down to a single-page, easily digestible document. (Kushner did not respond to an interview request made through a spokesperson.)

Public records also show that in 2020, Rosemond’s associates hired Brett Tolman — a former federal prosecutor who has boasted of helping secure a pardon for Kushner’s father — to lobby for clemency for Rosemond. Rosemond’s supporters paid Tolman roughly $40,000, according to Lonnie Soury, their spokesman through the nonprofit Families of the Wrongfully Convicted.

Leeann Hellijas, a longtime friend of Rosemond who has led the effort to free him and was named on the lobbying records, said she considered it compensation for legal work “just like any other attorney.”

“I in no way think that we paid to get in there,” Hellijas said of their hiring of Tolman, who did not respond to an interview request.

“It took a long time to get Jared and the president to really meaningfully dig into this case,” Corral said, “but once they did it became clear that they were seeing what I was seeing.”

Then came the Dec. 18 phone call with the Browns, in which they said Trump told them he had “looked at everything” and “believe you guys” that the sentence should be commuted. “I want to do this,” Trump said, according to the affidavits.

“Based on my conversation with President Trump, I believe that Mr. Rosemond’s sentence was commuted on Dec. 18, 2020,” the Browns each wrote in their affidavits.

Hellijas recalled that the prisoner’s closest supporters were “screaming, ecstatic when they heard the news.” She said that Tolman told them an official at the White House had said they should be ready for his release the next week, and travel receipts show Hellijas and members of Rosemond’s family arrived in the area of the West Virginia prison, USP Hazelton, on Dec. 22. She said that they stayed at a hotel down the street from the prison and waited but that no record of commutation was ever sent to the warden.

Hellijas said that the slow realization that Rosemond was not getting out was traumatizing for his adult children. “To be honest, it was worse than losing trial.”

Rosemond’s attorneys wrote in their brief that they have since attempted in vain to persuade the Biden administration to “carry out President Trump’s commutation.”

Corral said she did not know why Trump did not put Rosemond’s commutation on paper during his final months in office.

“There was sort of chaos — there was an insurrection, there was a number of things happening which certainly created distractions,” Corral said, adding that in her opinion, that didn’t legally matter. “There’s nothing that requires additional steps.”

Apple is set to announce new hardware today. The company is holding a (virtual) keynote at 10 AM PT (1 PM in New York,...
Read more
Tech

What Katey Sagal Has Done Since Sons of Anarchy Ended

Katey Sagal played one of the most important characters in Sons of Anarchy, but what has she done since the show came to an...
Read more
Tech

D&D: Why Spelljammer Is Likely To Return | Screen Rant

The Dungeons & Dragons players of the world could soon be hanging a flag at the end of the mast and taking to the...
Read more

autosafely.com it's managers and its employees (collectively "The Company") do not make any guarantee or warranty about what is advertised or above. Information provided by this website is for research purposes only and should not be considered as personalized financial or health advice.
Copyright © 2021 Auto Safely. All Rights Reserved